Skip to content
You are now leaving https://www.ionispharma.com to visit
Continue to site Cancel “Innovation” is something we hear a lot about. But when you break it down, what is it really?  If innovation is so important, why is it so hard to define?

In each episode of Innovations, host Dave Ecker and his guests will explore the fascinating field of drug discovery. How do the people doing the “innovating” know when they’ve done it? And importantly, who are the people doing it? What makes them tick? And what inspires them when they’re not at the bench?

In each episode of this podcast, Dr. Ecker will introduce listeners to some of the brightest minds in biotech. Through their lively and thoughtful conversations, you’ll find out what fuels the innovation that leads to novel medicines capable of transforming peoples’ lives.

Listen on your favorite podcast service What do sword fighting, fruit fly experiments and a fascination with protein aggregation in the brain have in common? They’re all activities that have consumed Dr. Elaine Pirie. A fencing enthusiast at young age, the St. Paul, Minnesota native started her scientific journey researching retinal degeneration in drosophila at the University of Wisconsin-Madison. Her desire to discover the cause of protein aggregation in ALS and other neurodegenerative diseases and an interest in genetics inspired her graduate and pos-graduate work, including three years as a research assistant in the lab of Nobel Prize-winner Dr. Bruce Beutler. At Ionis, Elaine’s research is focused on understanding the activity of GLP-1 conjugated antisense oligonucleotides in the beta cells of the pancreas. The goal: identifying and advancing new targets for Type 1 and Type 2 diabetes. 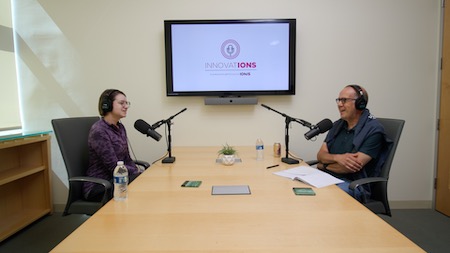 So, what is “innovation” to Dr. Elaine Pirie?

“It’s when we turn a problem to the side and explore it from a completely different angle. The solutions that come from looking at it in a different way, that’s innovation.”

Starting with his idyllic “free range” childhood exploring nature in northern Utah, Ian has maintained an enduring curiosity about the world. At one point, he even imagined himself as a wildlife biologist tracking wolves in Yellowstone with a camera and notepad. As an undergrad he was fortunate to have mentors who cultivated his love of scientific discovery, which ultimately led him to a career in molecular biology research. His goal: helping to alleviate the suffering caused by disease. Today, he’s doing just that as a member of Ionis’ Medicinal Chemistry department. As part of the Receptor Biology team, Ian works to discover, design and produce ligands, including antibodies and peptides for Ionis’ advanced ligand conjugated antisense, or LICA, technology. So, what is “innovation” to Dr. Ian Huggins?

“Knowing where we need to be, knowing that we’re not there yet, and finding a way to build a bridge that gets us there.”

From Nanjing, China to Woods Hole, Massachusetts to the sunny shores of La Jolla, California, and many points in between, Dr. Zhao’s journey to innovation has been full of discovery. With initial aspirations of becoming a marine biologist, she was ultimately attracted to Ionis because “I was amazed at how much basic research is done” at the company. Also driving her decision was a desire to apply her research to drug discovery that could eventually benefit patients. Now, she’s spearheading core research for an initiative intended to marry Ionis’ pioneering antisense technology with the emerging field of gene editing. So, what is “innovation” to Dr. Crystal Zhao?

“It’s a mentality. It’s about our curiosity…It’s about the courage to test and go beyond what we know today.” 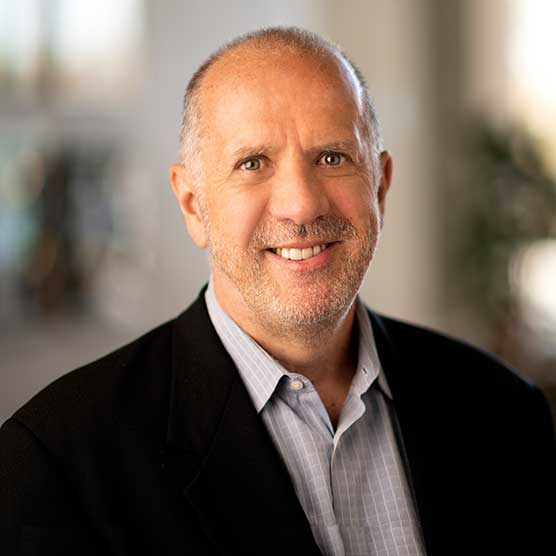 Dave Ecker is vice president of Strategic Innovation at Ionis Pharmaceuticals and a co-founder of the company. He is responsible for identifying and accelerating the creation of new therapeutic technologies that have potential to pioneer new markets in healthcare.

Dr. Ecker has over 30 years of experience in the biopharmaceutical industry, has published over 140 scientific papers and has 100 issued U.S. patents. In addition to Ionis, Dr. Ecker is a co-founder of Ibis Biosciences and Janus-I Science.

Dr. Ecker is a recipient of numerous awards and honors, including the Ionis Legacy Award, the Volwiler Distinguished Research Fellow the Donalee Tabern Outstanding Researcher of the Year Award, and the Wall Street Journal Technology Innovation Award Gold Medal.

You can find out more about which cookies we are using or switch them off in settings.

This website uses cookies so that we can provide you with the best user experience possible. Cookie information is stored in your browser and performs functions such as recognising you when you return to our website and helping our team to understand which sections of the website you find most interesting and useful.

Strictly Necessary Cookie should be enabled at all times so that we can save your preferences for cookie settings.

If you disable this cookie, we will not be able to save your preferences. This means that every time you visit this website you will need to enable or disable cookies again.